We have skills in our hands,
knowledge in our head,
and loves to all patients.

We provide a high standard level of medical care, so we make effort necessary facilities and spread equipment facilities.

We also provide to consistent that medical care, rehabilitation and home healthcare by safety of relief team’s medical care.

We are aiming at being a core hospital of community health care that is importance to emergency medical care for everyone can use anytime without worry. 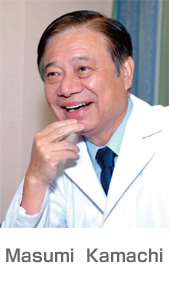 From the Shimonoseki Kamachi hospital which has started on 19 beds in 1974, past 36 years. Kamachi group was growing as the medical corporation which manages 12 hospitals and 6 hospital schools. We effort into a recovery rehabilitation, and establish a recovery medical institution of 10-20 by metropolitan area and participate in medical treatment of aged society from now on. We will do best even in the future.

Masumi Kamachi is social Medical Corporation the Chiyukai fandation of the chairperson of the board of directors and the president of the Kamachi group. He was born in Kurogi-machi, Yame-gun, Fukuoka on April 14, 1940.

We deicide that “Rights and duties” following list for the patient takes best and safety medical treatment. Please cooperate to keep good medical environment based on a relationships of mutual trust.

Our hospital works on protection of medical treatment (informed consent) based on explanation and the assent to patients and the personal information positively.

1. Use within the hospital, service of medical treatment (health care) for patients
2. Use within the hospital, provision information to other institutions and organizations, etc. Collaboration on medical and other services with other hospitals, clinics, midwife clinics, pharmacies, home nursing stations, and long-term care service providers.
3. Basic document for maintenance, improvement of other use, medical care, care services and duties
*We accept order of cancel and change it anytime.